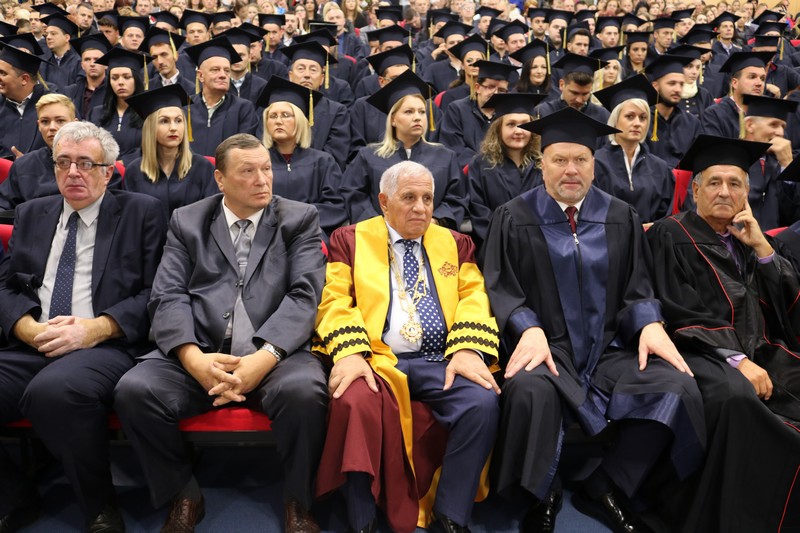 At the International University Travnik in Travnik, a ceremony was held for the eighth generation of PhDs, Masters and Graduates attended by members of the academic community of the  International University Travnik, Zoran Matošević, Assistant Minister of Education, Science, Culture and Sport of Central Bosnia Canton, parents and friends of graduates and magistrates, as well as many other guests.

In academic 2017/2018. International University Travnik has promoted 458 graduates, of which 365 graduates, 90 magisters and 3 doctors of science.

Rector of the International University Travnik in Travnik, Academician, prof. Dr. Ibrahim Jusufranić congratulated the graduates and their families in their address and said they would be proud of their education at the International University Travnik, which by the quality of education assumes one of the leading positions in Bosnia and Herzegovina, the region and beyond. Diplomas awarded by PhDs, Masters and Graduates are recognized not only in our country, but also in all the countries of the former Yugoslavia, throughout Europe and the world.

All of us who work at the International University Travnik today stand up to you with raised head because the diploma you get is practically an image of our work and your efforts and the commitment that the knowledge we have provided you use your whole life for yourself, your family and for the society as a whole .

The end of academic studies marks one of the most important dates in your life because you are starting to work and live with your work. It is you who are the bearers of the development of our society and assume the responsibility for your own and the life of your family as mature, academically educated people, the rector Jusufranić said to the graduated students.

The diploma that you carry today is the fruit of your work, based on the great work and effort you have invested in it. We at the International University of Travnik have also contributed to achieving one of the most important goals in our lives, which motivates us to continue to provide even higher quality education to our students, said Rector Jusufranić.

Knowledge today is the foundation of the strategy and is a prerequisite for improving corporate business practices, as well as corporate social responsibility. The International University Travnik has been certified by the European Academic Assembly for Corporate and Social Responsibility, which was established by the IUT's acceptance into the partnership of the European Academic Community.

Rector Jusufranić emphasized that the International University Travnik has its own educational and teaching policy tailored to the needs of students’ training and adapted to the needs of the economy, which is the basis for all students to be able to engage in company work and complete the tasks they have set before completing their studies.

For these reasons, the students and professors of the International University Travnik transmit a torch of knowledge and wisdom around the world. Academician Jusufranić, once again, on behalf of the entire academic community, congratulated the graduates on successful completion of the study and wished that this act of festive promotion be a stimulus for their continued success in public as well as in private life.

Dean of the Faculty of Economics Travnik, prof. Dr. Enes Huseinagić, said he was very proud of the staff who came from the eighth generation. He added that they were delighted to have received competent persons and prepared young people for further lifelong learning that would help them make a bigger contribution to the construction of Bosnia and Herzegovina.

Dean of Faculty of Traffic and Transport Engineering Travnik, prof. Dr. Sinan Alispahić, pointed out that the ceremony was the result of the work of professors and associates during the course of the study. He added that the students were preparing for the market, direct production and work, so that with very small preparations can be incorporated into social structures in a good way and to contribute to the improvement and improvement of standards in society.

Dean of the Faculty of Polytechnic Sciences Travnik, prof. Dr. Asib Alihodžić, told his PhDs, Master's degree and graduates that the degrees that earned the work of students and professors were based on great effort and dedication.