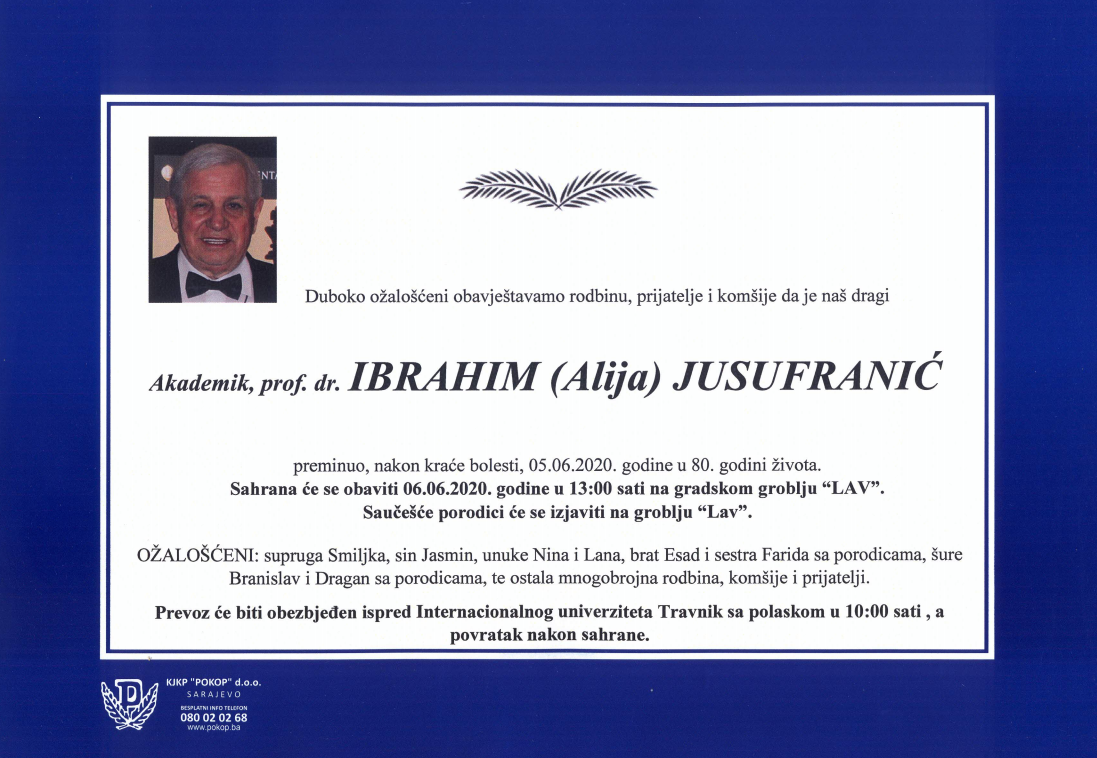 Academician, prof. Dr. Ibrahim Jusufranić, Rector and Founder of the International University Travnik in Travnik passed away in Sarajevo on Friday after a short illness.

He has published 90 scientific papers in the field in which he deals, as well as through professional studies, papers and articles. He participated in the work of 56 scientific and professional conferences in the country and abroad, including those of world scale. In his academic and university engagement, he wrote over 20 books as an author and co-author, the most important of which are: “Enterprise Organization”, “Enterprise Economics”, Traffic Systems – Theory, Transport, Technology, Trends, “Economic Ideas – Between Local and Global , entrepreneurial and predestined, individual and mass, monistic and pluralistic, institutional and alternative “,” Urban passenger transport systems “,” Managerial economy “,” Business logistics “,” Basics of road traffic – organization, technology, economics, logistics, management “,” Innovation in urban public transport “,” Passenger transport in cities “and many others.

For his long and fruitful work he was awarded the most prestigious awards and recognitions such as: The highest recognition of the state “July 27 Award of the Republic of Bosnia and Herzegovina” for 1991 for outstanding results in GRAS, and creative contribution to the general progress of the country; Plaque of the Croatian Scientific Society for Transport “for special merits in the improvement of transport and development of the HZDP”, 2002, “Plaque of the City of Sarajevo”; “Recognition for outstanding merits for the development of GRAS” and several plaques for outstanding contribution to the defense of the state of BiH. He is the winner of the Sixth April Award of the City of Sarajevo. In 2003, GRAS Sarajevo was declared the most successful JGP company in the world by the Madrid magazine “Aktualidat”, headed by prof. Dr. Ibrahim Jusufranić. There are other significant awards such as the “F.E.S.T. 2012 “for outstanding contribution to the cultural and tourist development of the city of Travnik”, Solin – Split, 2012; “Best University” – Award for the best university in the Balkans, Vienna, 2012, then High Recognition Honorary appointment of a high guest of the university (Universidad Nacional del Este – Paraguay), 2015, Award “Charter of Heroes with the Gold Medal of Nikola Tesla”, 2016. , “Scientist of the Year 2016” award, USA 2017, EBA business ambassador for Bosnia and Herzegovina, “Socrates” – international award given for personal contribution in the educational category, 2017. London and many others.

In 2018, the Oxford-based European Business Assembly inaugurated the Academician, Rector of IUT, Prof. Dr. Ibrahim Jusufranić in the EBA Business Ambassador, and in 2019 he received the prestigious award “Achievements 2019” for excellence in science and education. The last award received by the Academician, prof. Dr. Ibrahim Jusufranić arrived from the International Research Center for Achievement (IARC) in Chicago, USA, which named Jusufranić “Scientist of the Year 2020” for impressive achievements in the program “Social Sciences / Economics and Business”.

Professionally and personally, he was maximally committed to achieving the highest professional standards in the higher education system.

The funeral will take place on Saturday, June 6, 2020. at 13:00 at the city cemetery “LAV”. Transportation will be provided in front of the International University Travnik with departure at 10:00, and return after the funeral.

Professors, associates, employees and students are informed that the International University of Travnik in Travnik will not work on Saturday, 06.06.2020. years. Regular activities continue on Monday

Classes at the International University Travnik postponed until further notice

The Ministry of Education, Science, Youth, Culture and Sports of the Central Bosnia Canton has…

Within the ERASMUS + mobility program, a mobility contest was announced at the Faculty of…